There are two kinds of classes one can sign up for at the Le Cordon Bleu, if you are looking to do something on a short holiday. They have cooking classes that involve hands-on cooking in a kitchen and then there are the demonstrations where you sit in a classroom with the other regular students of Cordon Bleu and just watch a Chef demonstrate the recipes. I had signed up for one cooking class that was named "Desserts in a glass" and one cooking demonstration named "Petit Fours and Meringues".

The Desserts in a glass was a fun class. There were 6 American women, a French woman and me in the class. The chef spoke only French hence we had a translator who did translate every little detail of the recipe for us. In fact, we were only given the list of ingredients. We had to write down the method on our own. The two desserts we made were West Indian style coconut-pineapple served in a glass and Strawberry, pistachio and Speculos served in a glass. 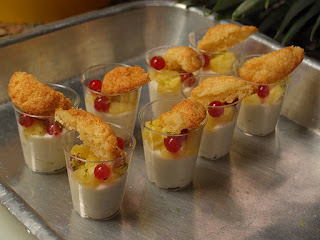 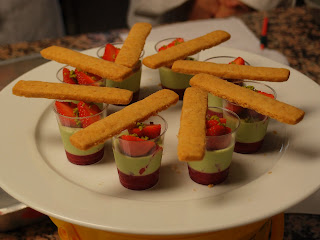 The methods were relatively simple. The chef made most of the items. I wish it had been a little more hands-on. At the end of the class, we were given boxes and bags to carry home the fruits of our labour.

The cooking demonstration was another interesting session. Other than the regular students at the Cordon Bleu (there were about 30 who had signed up for this class) we were just 2 other participants at this class. We sat right at the back of the class but we could hear and see everything the chef demonstrated since they had mirrors on top of the cooking counter and tv monitors. The entire demonstration was translated in English since Cordon Bleu is a bi-lingual school and many of its students don't speak any French.

At the demonstration, the Chef demonstrated the recipes for Marshal's Batons, Raisin biscuits, Macaroons and Cigarettes. At the end of the class we were allowed to taste the end products. It was a very interesting experience. 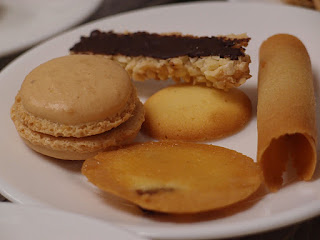 I would definitely recommend a class or two to any one interested in food and cooking at the Cordon Bleu on your next visit to Paris. They also have schools in other countries and have a very detailed website. Take a look at the website for more ideas.
Posted by Divya Chandran at 7:47 AM