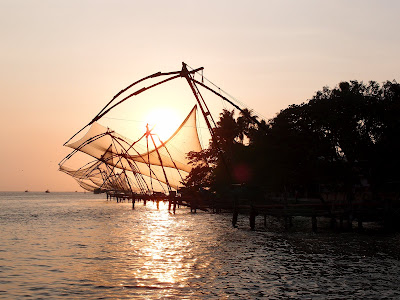 Malabar cuisine is truly spectacular. Whether Kerala is God's own country or not, its cuisine is truly God's own. I love Malabar cuisine and I get cranky if I don't get my fair share of it every now and then. I plan a trip across the state border at least once a year, to indulge in the delicacies of the neighboring state. Malabar cuisine may not be for everyone. First of all, it requires a certain tolerance to coconut oil. Coconut oil is abundantly used in all the dishes. Coconut oil is to Malayalis what mustard oil is to Bengalis. The seafood and other non-vegetarian dishes stand out from the rest of what the state has to offer and are my favourites. 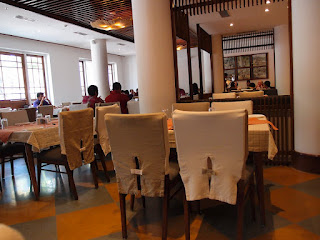 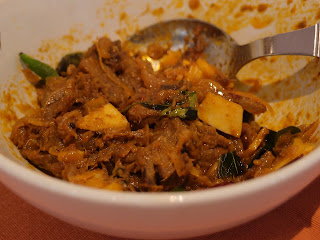 A visit to Ernakulam/Kochi is incomplete for me without a stop for lunch at the Grand Hotel on M G Road. Its a grand old institution that has been serving scrumptious food to the locals and tourists alike since the mid 1960s. The restaurant at the Grand received a face-lift in mid 2011 and has opened its doors once again to its loyal customers. The restaurant offers North-Indian, Continental, Oriental and Malabar fare but in the last 12 years of my visits to the Grand, I do not remember ordering a single dish outside the Malabar cuisine. Ok, maybe once I ordered caramel custard for my son.

I am also very fond of restaurants in Fort Kochi that cater mostly to the foreign palate. Most restaurant menus in Fort Kochi will feature grilled seafood and a fusion of malabar and continental cuisine. On my recent trip to Fort Kochi I had the opportunity to have dinner at the Old Harbour Hotel which is just across the street from the Chinese fishing nets. We ordered a grilled prawn appetiser served with beetroot chutney & pineapple chutney, Indian-style sauteed crab served with rice and a dish of Prawn Ullarthiyathu wrapped with a fillet of red snapper and steamed. The seafood was fresh and flavourful and menu was definitely designed to cater to the tourists from the far and beyond. 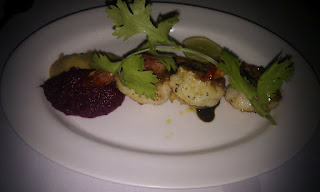 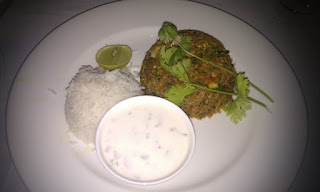 I am personally very fond of the restaurant at the Malabar House on Parade Road which is a small boutique hotel. There is also a Tapas and wine bar in the hotel premises. I did not get the chance to dine at the Malabar House during my recent trip but I clearly remember relishing the grilled seafood platter and the Pork Vindaloo Ravioli from my previous trips.

The other restaurant that I stopped at for dinner in Fort Kochi on the following night was the History Restaurant at the Brunton Boatyard Hotel. The Brunton Boatyard again is not far from the Chinese fishing nets and is situated right by the waterfront. The History restaurant is a tribute to the settlers of Fort Kochi who have called this island home over the centuries. The Chef, Mr.Ajeeth has drawn inspiration from the Brahmins, Syrian Christians, Jews and Portuguese among other settlers who settled to Fort Kochi decades ago. 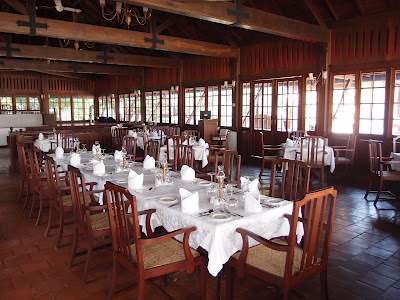 The limited menu varies on a daily basis and among other dishes are three signature dishes which they claim is unique to the History Restaurant and will not be found in any other restaurants in Fort Kochi. On the night of our dinner, the signature dishes were a slow-cooked First-Class Railway Mutton Curry, Chuttuli Meen - a dish of brackish water fish stuffed with shallots and ginger, grilled and finished in the oven with potatoes and Bristow Camp Potatoes - baby potatoes sauteed with red spinach and spices. The bar menu at the History restaurant was impressive and I spotted some unusual liqueurs among some usual suspects.
Posted by Divya Chandran at 4:08 AM 1 comment:

Annapoorna is synonymous with the word breakfast. Although there are many outlets round the town, Annapoorna People's Park on Govt Arts College has a comfortable and relaxed ambiance compared to the busy and loud atmosphere of the other outlets. The Vada-Sambhar, Ghee Roast, Rawa Dosa and Poori-masal are local favourites. There is even an executive breakfast available which is like a breakfast-thali with a variety of tiffin items. Round off your breakfast with Annapoorna's south Indian filter coffee which has a serious fan-following in town. (Breakfast for 2 with coffee Rs 125 - 150).

With its white-washed walls and cool air-conditioning, Thats Why On the Go makes for an ideal stop for lunch in the scorching afternoon heat. Whether you are looking for a light lunch or a heavy one, On the Go has something for all (salads, wraps, kebabs, Mediterranean appetisers, biriyanis, rotis, curries, pastas and other continental mains). Dessert at this place is not to be missed. Their Mud Souffle and Ferraro-Rocher cake are a treat for chocolate-lovers. (Meal for 2 Rs1000 - 1250).

Latitude is the coffee shop at the newly opened Taj Vivanta-Surya in Race course. Both buffet and a la carte options are available for dinner. The buffet spread varies everyday and leans more on Indian cuisine with a few continental and Asian dishes . The salad bar is well-stocked with ample greens and vegetables and there is also a live counter for either pastas, dosas or appams. The a la carte menu is large and will not disappoint you. The al fresco seating area is very pleasant in the evenings. (Meal for 2 - Rs.1200 - 1500). For a taste of local flavours head to Juniour kuppanna in Ram Nagar. Kothu Parotta, Chicken Kolumbu, Kal Dosa, Pallipalayam Chicken and Egg Kalakkal are highly recommended. (Meal for 2 - Rs.500)
Posted by Divya Chandran at 10:58 PM 1 comment: 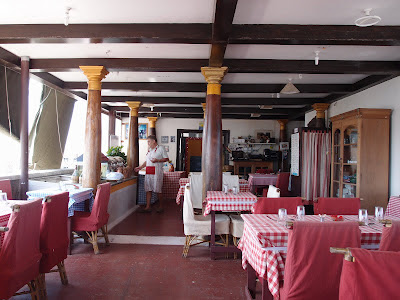 After strenuous exercise and a moderate breakfast we were looking to load up on pizza or pasta calories and Don Giovanni seemed to be the apt choice for lunch. It is situated on the roof top of a very non-descriptive building, on a busy street in Puducherry. The interiors are a mix of traditional Chettiar house-style pillars and red checkered table cloths. The general feeling is very relaxed, in fact the owner (supposedly an Italian chef) seemed very chilled out, walking around in shorts, taking orders and sipping on beer on the side. Wine and beer was available along with the food there. 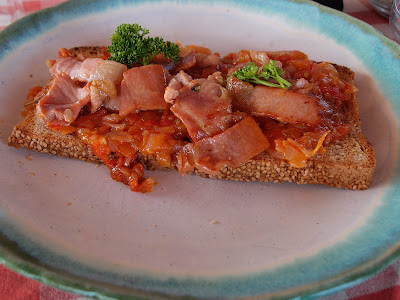 We ordered some home-made orange drink which was quite refreshing for the Puducherry heat and humidity followed by an appetiser of Crostini with ham and tomatoes. The tomatoes were a mix of sauteed onion, tomatoes and mild herbs. My friend did say it reminded her of a tomato subzi made in her folk's place that was served with chapathis!! 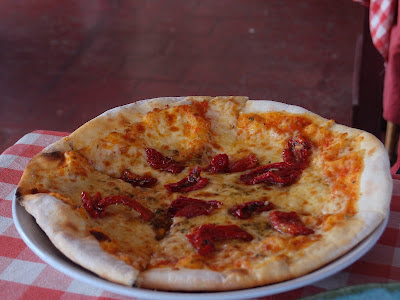 For the main course we ordered a pizza with sun-dried tomatoes, pesto ravioli and Chicken Cacciotore. The pizza was quite good. It seemed to have been baked in a wood-fired oven. The crust was thin and cheese was stringy and of good quality. 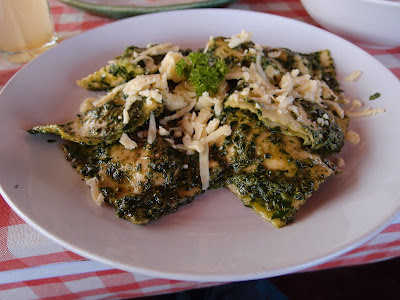 The pesto ravioli tasted good but was rather heavy on the cheese. The raviolis were filled with only cheese and then tossed in basil pesto. I wish the filling had some ricotta in it, it would have made the raviolis taste lighter. The pesto was fresh and flavorsome. 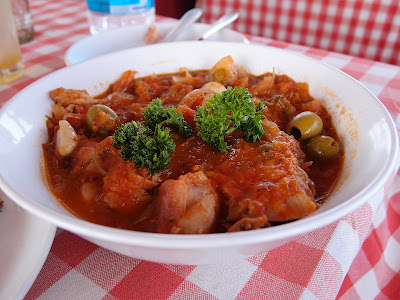 The Chicken cacciotore was a stew of chicken with olives, tomatoes and onions. It was a very homely dish with no great airs about it, just the way it was supposed to be. The meat was well cooked and was literally falling off the bones.

The dessert selection did not look very attractive and we were already very satisfied after a good lunch, so we skipped dessert. The owner had this weird habit of walking up to every table and asking his customers how the food was, by just shaking his head and making eye contact. And he would do that more than once during a meal. We found it funny but it may make some customers uncomfortable.

The overall experience was good. For a seasoned traveler who has eaten in many good Italian restaurants, Don Giovanni may come across average. Nevertheless, it is a decent option for a meal in puducherry which is scattered with cafes and restaurants serving spin offs on European cuisines.