Choosing to sign up for a walking tour in Jaipur was definitely a good idea. The main purpose of my trip to Rajasthan was to relax and enjoy the place and the food. On a rather laid back holiday, the walking tour was a genius idea. Fours hours of walking while tasting the staples of Jaipur was the best way to see and observe the sights and sounds of the Old city in Jaipur. 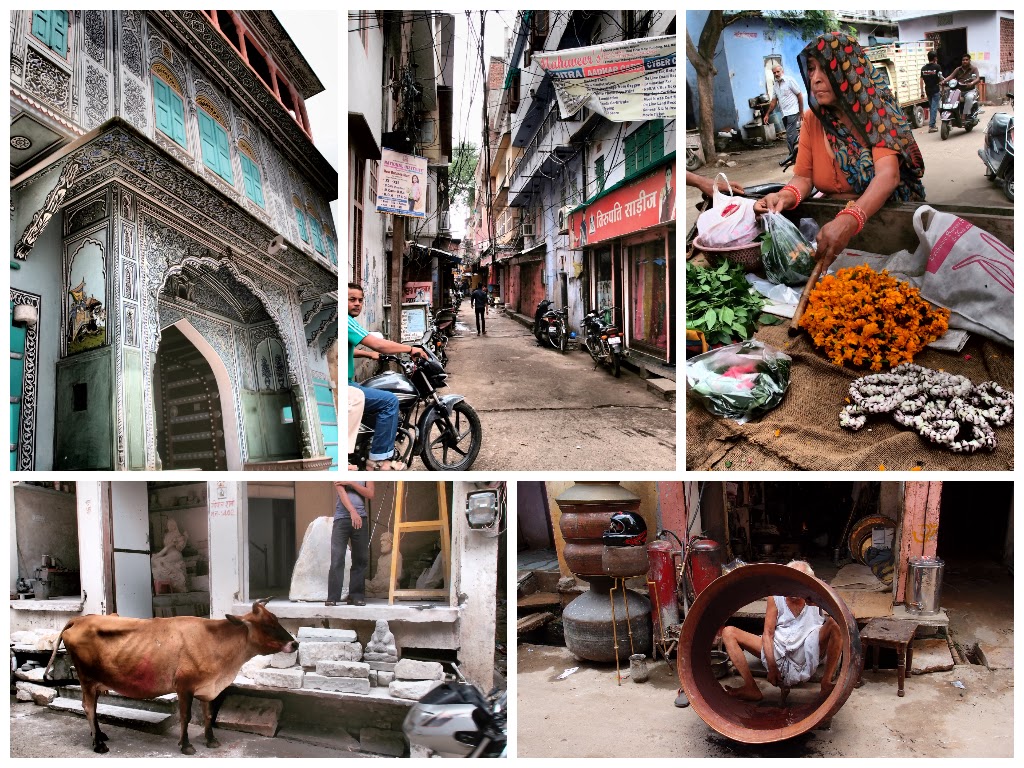 My friends and I signed up for a customised four hour walking tour that involved walking in 2 of the major segments of the old city. We observed the various craftsmen at work while getting to taste the popular snacks of Jaipur at regular intervals from the popular roadside establishments. In the initial part of our walk, we walked past various havelis of the Old city that played a prominent role in the city's history. Our first stop for a bite was by a roadside stall that was very popular for its Kachoris that were filled with a potato filling. In the same stall, I got to see a contraption that was fabricated to let out Sev batter in fine strands, in full action. 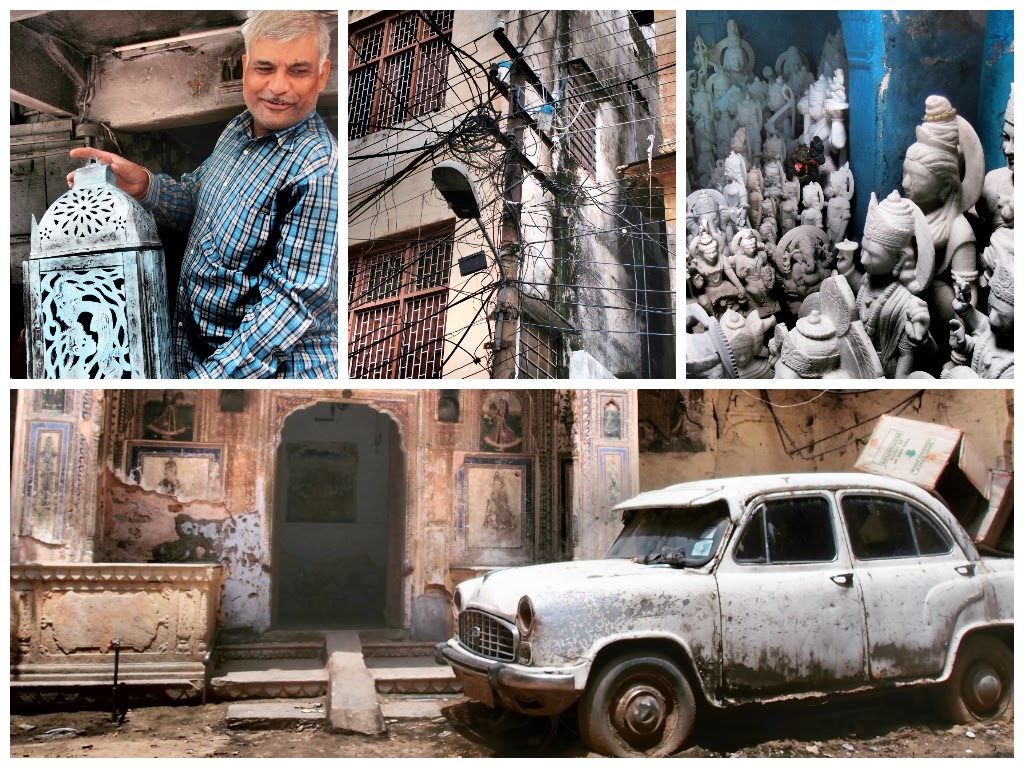 As part of our walking tour, we got to visit a few havelis that are now places of worship, largely for Lord Krishna. Outside one of those religious havelis, I was fascinated to see a man making Ghewars using a ketchup squeeze bottle. We stood there watching him in awe for a few minutes until the heat of the wood burn stove got to us. It was in deed, a fascinating sight!!! 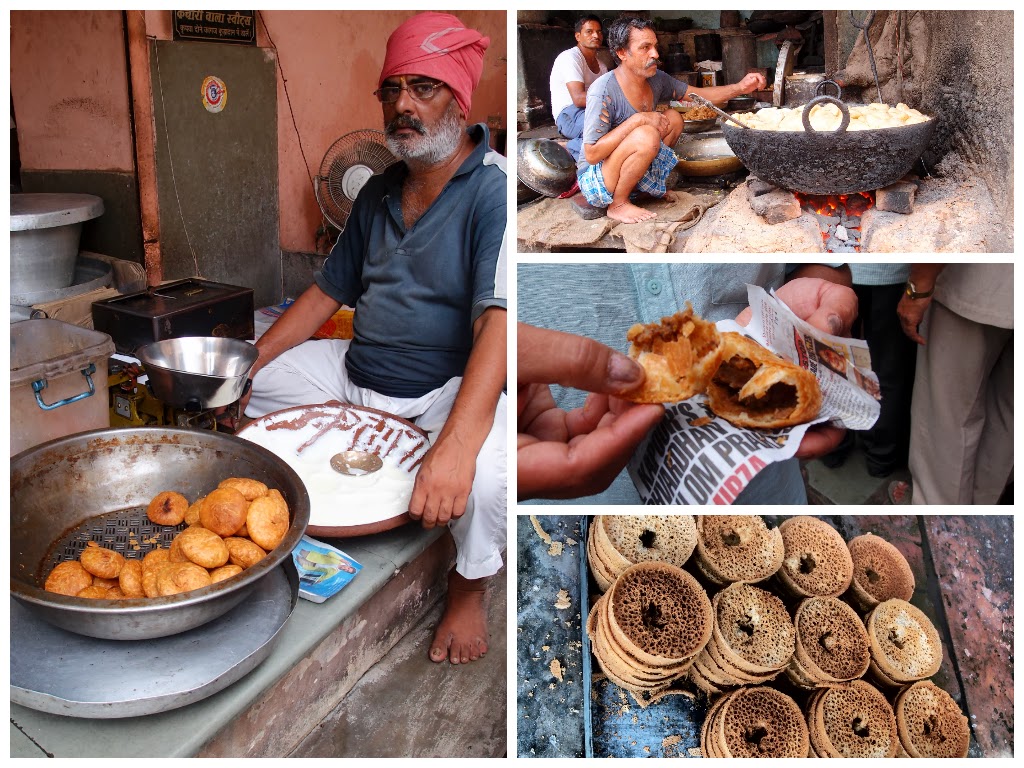 Along our walk we got a chance to see various snacks being prepared by street vendors and small establishments that catered to the neighbourhood. We were then lead to a small shop that was popular for its Kachoris served with Dahi. The Kachori had a spicy dal filling that had whole spices mixed in the filling. It was refreshing to eat these spicy Kachoris with the dahi by the side. The shop owner was a stern man who sat by a weighing scale and measured exact quantities of dahi to go with each Kachori. Midway during our walking tour, with the sharp sun belting on us, we decided to take a short tea break. 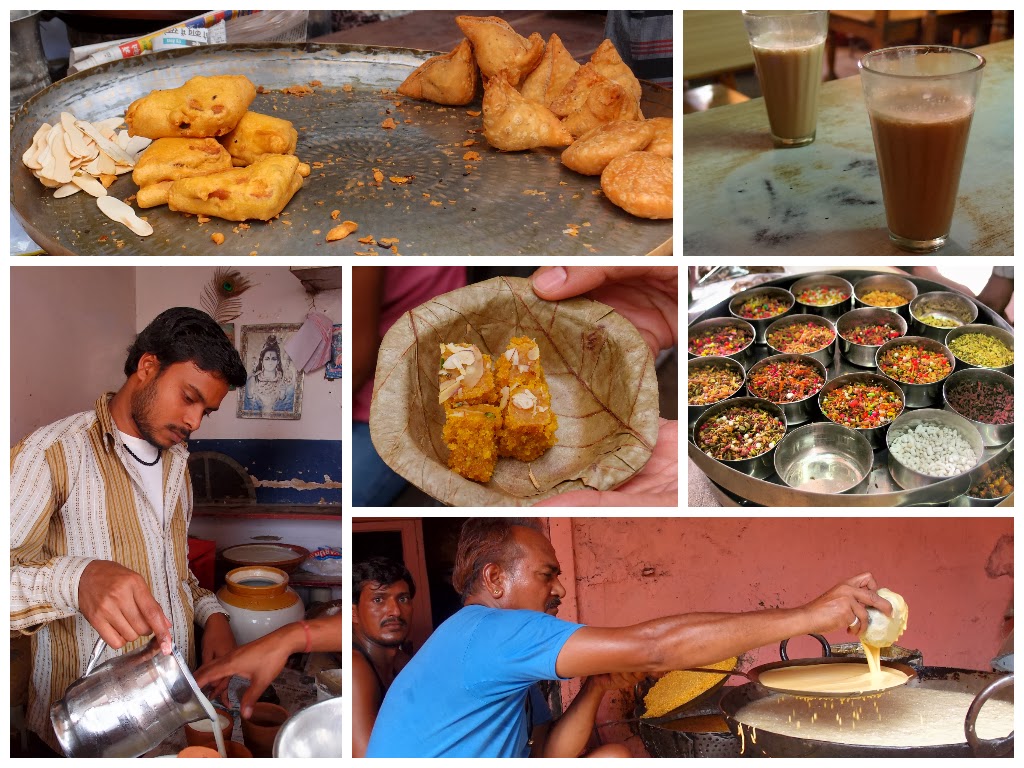 We were taken to a store that was in a basement for the best Chai in old city. The hot chai was light and refreshing and in a way helped cool off for a while. After our chai break we walked through a whole-sale market before heading to the area that specialised in Meenakari Jewelery work. The streets nearby were lined with Namkeen stores that seemed to have endless varieties of fried snacks in a mixture of colours and textures. On request, we were taken to a store that specialised in Supari (beetelnut) products. Like children in a candy store, we got very excited and tasted a huge array of suparis from the supari sample platter. Finally, we made up our minds and picked up a variety of flavoured suparis to brings back home for ourselves and our family. I also managed to pick up some Fini for my kids from another store that specialised in Fini. We decided to call it quits after a glass of cool and soothing lassi in mud glasses. While all of us wanted our lassi without the topping of cream from the yogurt, our guide decided to have his lassi with extra cream!!


We had a walked for a total of 4 hours through the narrow and busy street of the old city of Jaipur. There were a few moments when we wished that it had not rained the previous day. Apparently, the waste management system in the old city is not very efficient and it showed. According to statistics, 70,000 people lived in every sq.km of the old city. Speeding bikes and chilled out cows were the norm on the streets. It was a very insightful tour and our guide's passion for his city showed through. I would highly recommend this tour to anyone that wants to see and observe Jaipurians at close quarters. The opulent palaces of Jaipur and the surroundings are at one end of the spectrum and life in these narrow lanes of the old city show the other end of it.
Posted by Divya Chandran at 9:54 PM